The Moose Jaw Court House was constructed in 1909 and designated a Provincial Heritage Property in 1988. Located at 64 Ominica Street West in Moose Jaw, Saskatchewan it is the oldest continuously-functioning provincial court house in the province.This concrete and steel structure represents establishment of the Moose Jaw judicial district at the turn of the 20th century, replacing an earlier wood-frame court house that had been built on the same site. Use of hydraulic pressed brick and Bedford Stone trimmed with Indiana Limestone marked the beginning of a building program by the young province to replace buildings of the territorial period with more impressive structures.

Heritage value of this building also lies in its architecture. It was designed by Toronto-based architects Darling and Pearson during their brief service as Saskatchewan’s provincial architects. Darling and Pearson were known for their bank architecture in the Neo-Classical style. During their tenure in Saskatchewan they designed this court house and the Regina Land Titles building. Later court houses designed by Provincial Architects Raymond Philbrick and Maurice Sharon followed the stylistic trend of the Moose Jaw facility before Sharon adopted the Colonial Revival style in the 1920s.

Significance of the Moose Jaw Court House also resides in certain character-defining elements that reflect the building's use as a court house such as the carved stone trim which features symbols of the Province of Saskatchewan and those elements that reflect the Neo-Classical architectural style such as the vertical proportions, prominent cornice and double-storey Doric order, brick columns adorning the entrance, pressed brick façade, stone trim and arched windows. 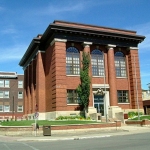